Is There a Black Snake in your Yard?

Home » Blog » Is There a Black Snake in your Yard? 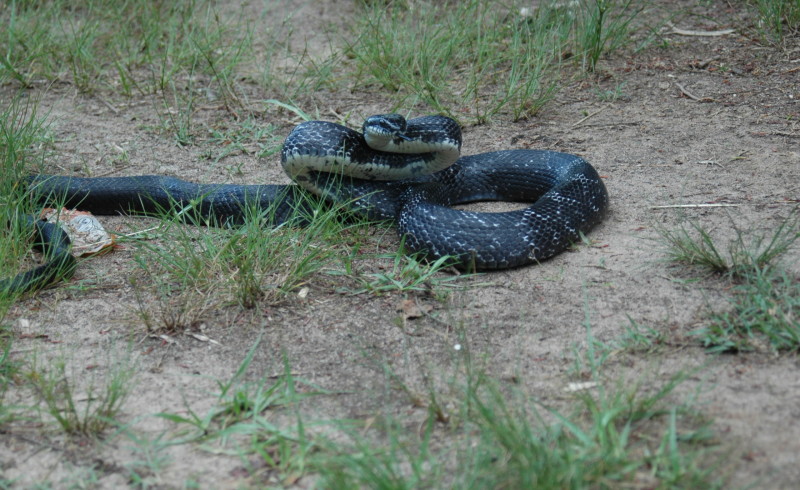 I’m not really scared of snakes, though they sometimes surprise me by seeming to appear out of nowhere. Over the years, we’ve found a number of black snakes in our yard; they’ve been in our chicken coop, in our driveway, even in my mother-in-law’s house! There have been enough of them that we began to do some research to find out more. Do they bite? Are they poisonous? What do we do if we see one?

With just a few internet searches, we found that in our part of South Carolina, there are two kinds of black snakes: the Eastern black rat snake (Pantherophis alleghaniensis) and the Southern black racer (Coluber constrictor priapus). Here are some of the differences:

*Racers are dull in color. Rat snakes are shiny.

*Racers are all black with a white chin. Even the underside of the snake is black or dark grey. Rat snakes have occasional light blotches on their backs. Their bellies are white.

*Racers can climb trees and shrubs that have branches near the ground. Rat snakes can climb up to the rafters in buildings, along rock walls, and up the trunks of larger trees to branches high above the ground.

*Racers race. They take off so fast they seem to vanish. The rat snake, on the other hand, carefully considers its next move.

We also found out that the snakes share some similarities besides color. Both racers and rat snakes are beneficial to humans. They eat large amounts mice, rats, and other rodents. Both are non-venomous and will only bite if they feel threatened. They are helpful snakes to have in a field, farm, or even a backyard.

What should you do if you see a black snake? The best thing to do is to just let it be. Take a photo, draw a quick sketch, or just sit back and enjoy it from afar. The snake doesn’t want to interact; it just wants to go on its way.

If you’re concerned about finding a venomous snake, learn which ones live in your area. You can find a list for North America by state here.  If you do come across one near your house or in your yard, contact a professional animal removal company.