Five Salamanders of the USA 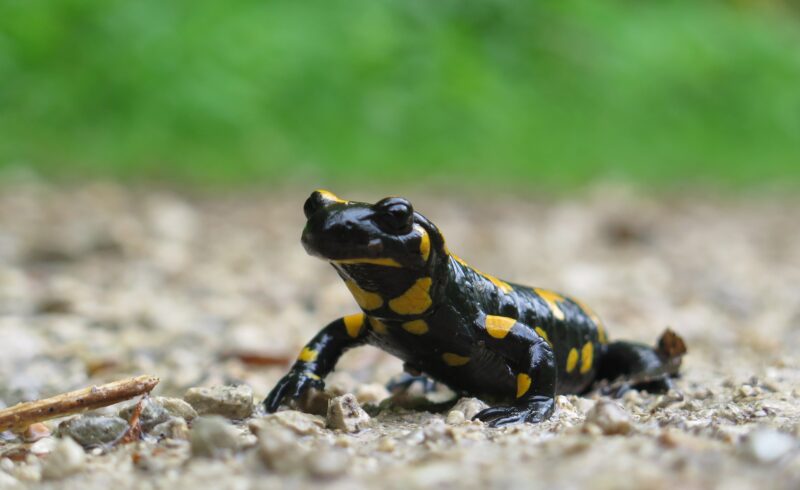 One day, as we were out by our creek, we spotted several salamanders under the rocks. They turned out to be southern two-lined salamanders. Here are several others you might find under a log or in a stream.

Mostly black, these salamanders have rows of spots down their back and a grey and pink underside. They often live under things like logs and rocks their whole lives. They can be found from eastern Canada down to the eastern half of the USA, and they like full-grown pine forests. Spotted salamanders breed in temporary pools most of the time, as fish would be present in permanent pools, and the fish would eat the baby salamanders. These salamanders can regrow parts of their bodies if necessary.

The southern red-backed salamanders are either brown or dark grey, with an orange or red stripe stretching the entire length of the body. Some of these salamanders have brown backs with some spotting on their sides. They can be found as far south as Tennessee and as far west as Minnesota. When they hatch, they don’t look like tadpoles, but instead look just like their parents in miniature. Because they don’t have lungs, they hide in damp places, which is why they can be hard to find in the dry summer.

The Northern Slimy Salamanders are mostly black with white spots with bodies that are as long as their tails. They live in areas from Florida to Texas and up to Missouri, Connecticut, Illinois, and New York. These salamanders get their name from a secretion that they squirt when disturbed or threatened. If you find one, leave it where it is and don’t touch it; you don’t want to disturb it, and the slime is hard to wash off.

Barred Tiger Salamanders can be very long: 13-14 inches! They are also a species that varies in color. Brown, yellowish, black, or grey, the salamander can have yellow or gray blotches or stripes. These salamanders are found in the West from Texas to Canada and across to California. They live on land in grasslands, deserts, and forests, moving into the water when they mate. Barred Tiger Salamanders can live for more than fifteen years!

This many-named salamander is called, among other things, the “devil dog,” the “snot otter,” the “mud devil,” and the “Allegheny alligator.” Eastern hellbenders are found in mountain streams and they hunt crawdads at night. Averaging 12-15 inches in length, these flat amphibians are the largest in the U.S. They are red-brown or spotted brown with a pale underbelly. The eastern hellbender lives in areas with fast-moving water and rocks from New York to Georgia and west to Kansas. The salamanders aren’t venomous, but they are poisonous if eaten by other animals.

If you find a salamander not described above, discoverlife.org is a great way to identify them. There are many salamanders waiting to be found, so hop to it!

Activity for the Week: Learn to Use Field Guides

Kick Off Your School Year the Outdoorisity Way: College Edition

All I Want for Christmas: Outdoorosity Edition