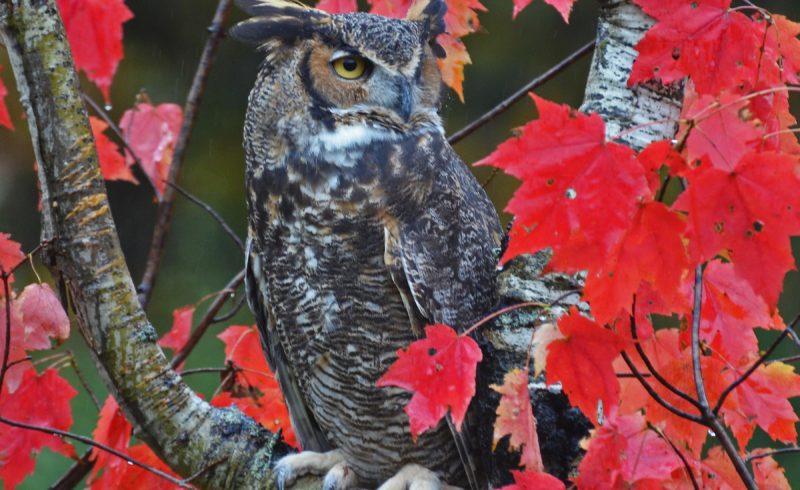 We love chickens at our house – not the fried kind, but the kind that wanders around the yard clucking, squawking, and eating insects. With two dogs, we can’t have roaming chickens anymore, but there was a time our chickens could go anywhere they liked. They even roosted high in the trees at night. That is, until they had a (too) close encounter with the local wildlife.

It happened late one night, or rather, early in the morning. I was up late working on a project, when around 1:00 a.m., I heard the chickens clucking outside. They had been roosting in a cedar tree in our front yard. I thought it was a good choice, as they were tucked inside the branches and hidden from predators.

Or so I thought. When I heard the clucking, I knew something was wrong. I found my shoes, grabbed a flashlight, and headed outside. I saw something moving near the tree and thought a coyote might be bothering them. “Ha!” I hollered out, hoping to scare it away. Suddenly, a huge bird flew up from the ground. I watched as it took off in the opposite direction, flying out over my neighbor’s house.

I continued toward the tree where I found one of our small hens lying on the ground. The large bird, which must have been an owl, had planned on making this little hen its dinner. In the light of the flashlight, I could tell the chicken seemed to be having trouble breathing. I picked it up and started towards the house, thinking I’d find a box somewhere to put it in. As I went, it came to its senses and began clucking loudly. I put it in our empty chick pen and headed off to bed.

Amazingly, the chicken recovered! And the owl? It had to find another food source that night. Chicken just wasn’t on the menu!

The owl I encountered that night may have been a great horned owl. Their diet includes many kinds of birds, and they will catch larger prey such as possums, raccoons, groundhogs, and skunks. They have even been known to eat cats and small dogs! Click here to learn more!

Relax, Refresh, and Reconnect in the New Year

Idea for the Weekend: Go on a Neighborhood Scavenger Hunt