Home » Blog » Getting to Know Your Mammals: Eastern Cottontail Rabbit 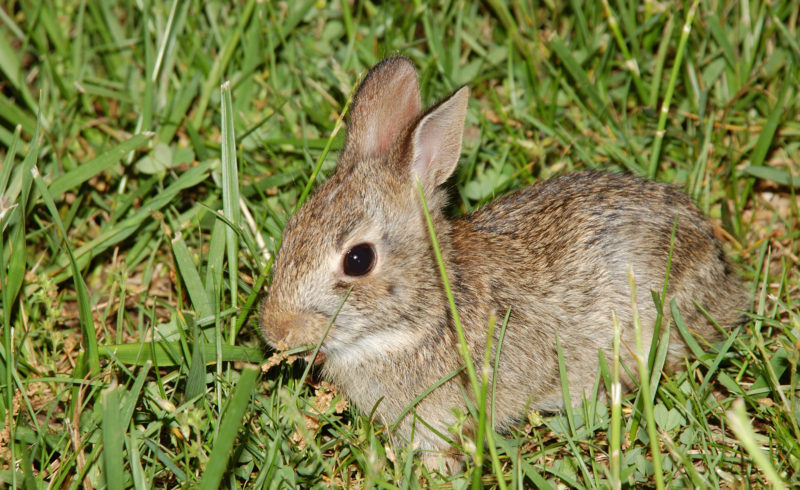 If you have a cat that goes outdoors, chances are it’s probably caught a few smaller animals. Our cat once came to the door with a baby rabbit in its mouth. As I reached for it, I realized the little rabbit was still alive.

Before I could get it, though, the cat let go, and the rabbit took off running. The cat went after it and caught it again. When I caught up with the cat, it let the rabbit go again – and the rabbit started to run!

The cat caught it a third time, and this time I was able to get it and take it away. I didn’t see any puncture wounds, and apparently this little rabbit was a fighter. We put it in a box with some grass clippings and called a local wildlife rehabilitator. It still seemed to be okay when we dropped it off.

The baby rabbit our cat caught was probably an eastern cottontail rabbit. These rabbits can be found from Canada all the way to South America. In the U.S., they make their homes from the East Coast to the Great Plains. They can adapt to many different kinds of habitats, although they prefer the fringes of open spaces such as grassy fields and meadows. Their fur ranges from dark gray to a light or reddish-brown. They have long ears that stand up, large back feet, and of course, the “cotton ball” tail.

Cottontails stay hidden most of the day, often among shrubs, brush piles, or hollow logs. They usually come out to feed a couple hours after dawn and the hour after sunset. They eat grasses, clover, herbs, and garden vegetables. In the winter, they look for bark, twigs, and buds.

If spotted by a predator, a cottontail will sometimes freeze in place. This way, it can blend in with its surroundings and hopefully not be seen. If it is chased by a predator, it will run in a zigzag pattern. Cottontails can reach speeds up to 18 miles per hour.

The female cottontail has her young in a shallow ground nest lined with her soft fur. They breed three to five times every year, having 3-8 young each time. The baby rabbits grow quickly and can take care of themselves after four to five weeks.

Hopefully the baby rabbit our cat had caught survived. If you find a wounded wild animal, be sure to call your local wildlife rehabilitator. He or she will know the best way to care for it. In the meantime, here are some tips you can follow.

Want to Learn More About the Eastern Cottontail Rabbit?

Check out one of these great sites:

Idea for the Weekend: Go Fishing!