Getting to Know Your Reptiles: Copperheads

Home » Blog » Getting to Know Your Reptiles: Copperheads 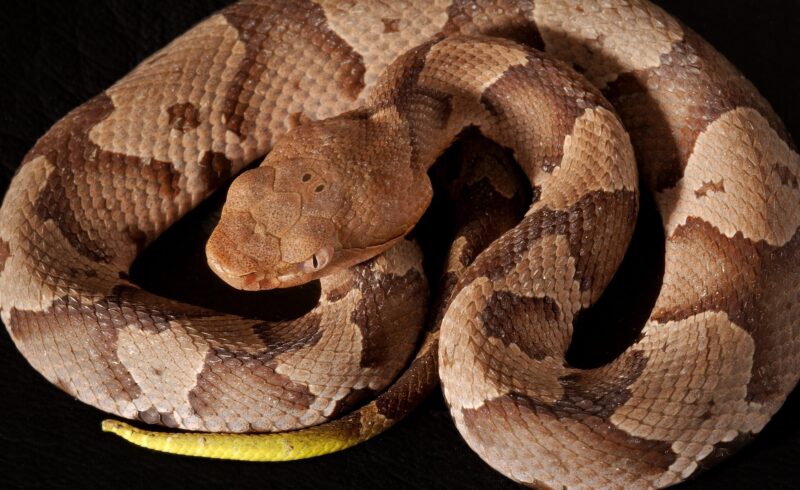 There are a number of venomous snake in the United States, and one to watch out for is the copperhead. But that may be easier said than done.

Copperheads live in areas from the Florida panhandle up to Massachusetts, and west to Illinois and Nebraska. It is copper-colored to reddish-brown with hourglass-shaped cross bands. It’s coloring helps it to stay camouflaged when coiled up in ground cover such as fallen leaves. Look at this photo of a copperhead in the woods. Can you find the snake?

Juvenile copperheads can be identified by the yellow tips on their tails. On average, the snakes grow to be approximately 24 to 36 inches in length. They can live up to 18 years in the wild in a variety of habitats depending on their range. For example, in the northeast and in mountainous areas, they are found on hills, in the forests, and near water. In coastal areas, they can be found along the edges of swamps and other wet woodland habitats. In the west, they live along along streams and rivers in woodlands. Sometimes copperheads live in man-made environments such as neighborhoods and construction areas. Copperheads hibernate from November to April, but may come out on warm days to bask.

The copperhead is a pit viper, possessing a heat-sensitive pit on its snout between the eye and the nostril. Pit vipers use this heat sensor to detect warm-blooded prey such as mice or rats, even in total darkness. The snakes can also strike at the prey with amazing accuracy. Copperheads bite with their fangs, replacing the fangs throughout their lifetime. They have five to seven sets of replacement fangs above the current ones. Besides rodents, copperheads eat birds, small snakes, and insects. They will even climb trees to get cicadas.

Unlike most vipers, copperheads may freeze when threatened, which is why people often step on them. A copperhead will bite a person when the individual gets too close, but while extremely painful, the bites are rarely fatal. Copperheads actually have one of the mildest venoms of the pit vipers. The venom destroys red blood cells and can break down tissue around the bite. Bite victims can be treated at the hospital for pain and swelling, and antivenom isn’t always needed. Sometimes copperheads bite using no venom at all, known as a “dry bite”.

“What You Need to Know About Recent Copperhead Bites.” National Geographic

“What Are Pit Vipers?” University of Georgia

Activity of the Week: Search for Hearts in Nature

Idea for the Weekend: Go “Bouldering”