Black Bears in the Backyard 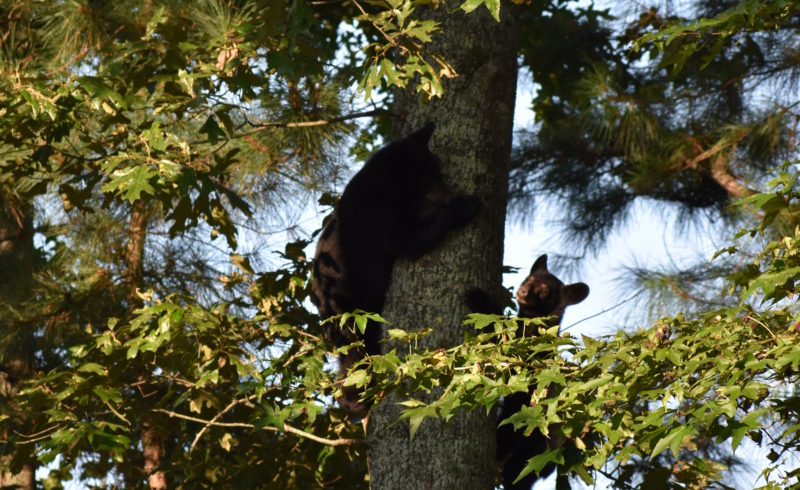 A couple of weeks ago around 7 am, the neighbor’s large dog was barking in our yard. Our two smaller dogs weren’t barking, but they were looking up into a tall tree. In the branches – two black bear cubs! We figured the bigger dog had frightened them, and they climbed to safety. Glancing around, we spotted the mother bear in another tree. And there was one more cub in a third tree, much higher than the rest of the family.

We called the neighbors, and they put their dog inside right away. I thought the bears might come down, since only two little dogs were there, and they weren’t barking. But the bears were content to wait in the trees. We put the little dogs in the house, then noticed the cubs were beginning to feel braver. The two in the tree together started to quickly climb down. We watched as they reached the ground, ran straight towards the tree their mother was in, and climbed up to join her. The third little cub did the same.

Soon after all three cubs were with their mother, she decided it was safe to climb down. She moved to the base of the tree, and one of the cubs followed. The other two were not as certain, climbing down the tree and then back up again. We kept watching, hoping they would walk past the house towards the woods. But the mother was just waiting at the base of the tree, most likely making sure all the danger was gone. We decided to get in the car and drive away so they would feel safe leaving.

I’ve often heard people say, “Watch out for mother bears; they’ll attack you,” so I was surprised when we saw the mother bear in a tree, too.  But mother black bears are not usually aggressive.  When people come across black bear families in the woods, the bears almost always retreat or climb trees.  Sometimes the mother may “show bluster” by blowing, clacking her jaw, slapping the ground or an object, or even rushing towards a person. However, these are just signs that she is nervous or frightened.

Fortunately for us, when we spotted the bear family, they were already up in the trees – so both the bears and us were safe. If you see bears while in the woods, however, follow these tips from the National Park Service.

Check out these websites about black bears:

“What if I Get Between a Black Bear Mother and her Cubs?” National American Bear Center.

Activity of the Week: Measure the Circumference of Trees

Activity of the Week: Get Lost in a Corn Maze

Activity for the Week: Plan an Outdoor Workout Circuit