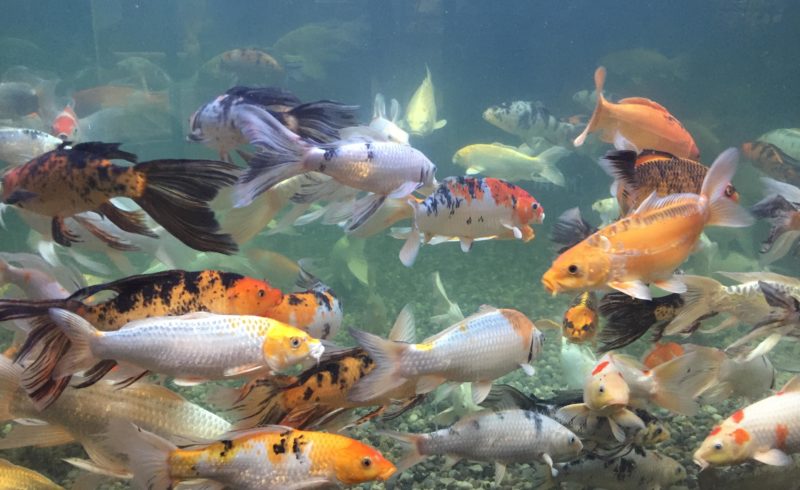 The next time you see a goldfish, whether in an aquarium at the pet store or a fishbowl at your friend’s house, know that the humans in its life will determine if it stays a harmless pet or develops in to one of the most destructive forces in a wild ecosystem.

Most goldfish are members of the carp family, and thousands of years ago their ancestors in China were raised for the dinner table rather than the pet store.  Thanks to their beautiful colors, however, they began to be prized as ornamental fish, kept first in ponds, and then in containers.  Today, they are popular pets, often the first pet a person purchases.  They are intelligent, they can learn tricks, their needs are basic, and they are well-suited for domestic life.

Unfortunately, many people do not realize that their small pet is a big commitment.  For one thing, a goldfish with a caring owner who understands its needs can live for more than forty years!  And although many people believe that goldfish only grow as large as the bowls and aquariums they live in, this simply isn’t true.  Most fish, including goldfish, are “indeterminate growers.”  This means that, unlike a person who will reach his or her growth limit and never get any taller, a goldfish continues growing for its entire lifespan.  The record for a pet goldfish kept in a home was set by Goldie, who was 15 inches long and weighed more than 2 pounds!

When an owner tires of caring for a goldfish or doesn’t wish to buy new equipment when the fish bowl becomes too small, the owner is faced with a dilemma.  What do you do with a pet goldfish you no longer want?  Unfortunately, many people think the solution is to release it into a nearby pond, stream, lake, or other waterway.  Although this may seem the most humane solution for one pet goldfish, it’s a fatal one for many other creatures in that ecosystem.

Goldfish breed quickly and grow very large in the wild – up to 18 inches long.  They are voracious and messy eaters.  Not only will they eat the food of native species, they stir up mud and silt, which interferes with the feeding habits of their neighbors.  This also inhibits the growth of the aquatic plants necessary to many organisms. It affects the overall health of the environment in which they live.

Studies show that, although most fish do not eat salamander eggs, ornamental goldfish will try them.  Once an individual goldfish identifies these eggs as a food source, other goldfish it may be schooling with will also add them to the menu.  In addition, prey fish that recognize native predators as a threat do not recognize goldfish as a source of danger. This causes them not to take defensive action such as trying to hide. As a result, the population of prey fish can diminish dramatically.

Owning a pet is a big responsibility and should always be carefully considered.  Goldfish are no exception.  If goldfish are provided with a healthy  environment, they will live longer than a dog or cat.  They have distinct personalities and can be trained to do tricks.  But the danger they present to local waterways and native species means that they cannot be released when an owner tires of responsibility.  Environmentalists agree that the best way to solve the problem of domestic goldfish in the wild is to educate the public, so spread the word!  Release is not an option for an unwanted pet fish! Instead, find a responsible new caregiver.

Activity of the Week: Guess the Object

Activity of the Week: Capture Wildlife