Getting to Know Your Insects: Field Cricket

Home » Blog » Getting to Know Your Insects: Field Cricket 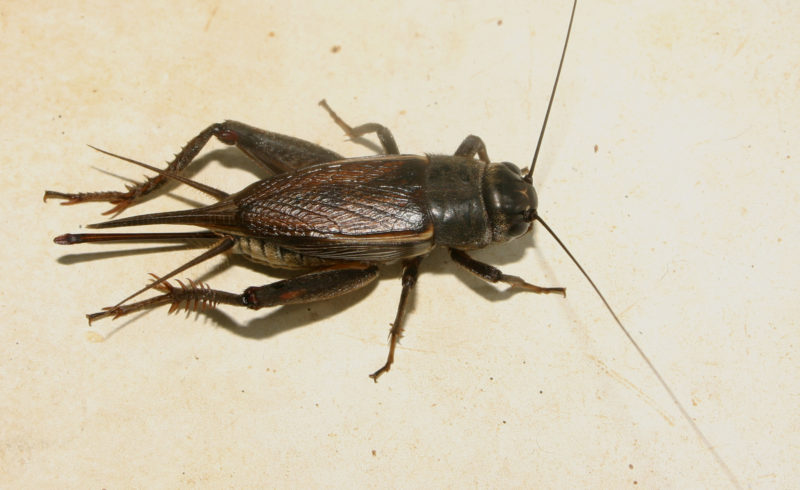 Have you ever heard a loud chirping noise as you head off to bed? If so, your unexpected houseguest is most likely a field cricket. These crickets can be found in a variety of habitats, such as forests, caves, fields, lawns, and sometimes your home. They can slip in through cracks in foundations and siding, around windows, and under doors.

Field crickets are found in most of the eastern and Midwestern United States. They are black and brown in color and about ½ to one inch long. They have rounded heads with long thin antennae. Like other insects, crickets have six legs, including two large back legs used for jumping. Although all field crickets have wings, only some species can fly. But all are able to make a chirping sound.

Crickets create their songs by moving a scraper (a sharp ridge) found on the edge of the left forewing across a series of wrinkles, or “files”, on the underside of the right forewing. The tone of the chirp depends on the distance between the wrinkles. Male crickets make the loudest sounds. They can create a highly-thrilled three-note song, which is answered by the female’s simpler two-note song.

The rate of the chirping is directly affected by temperature. The warmer it is, the faster a cricket will chirp. You can even use the chirps to calculate the temperature. To do this, count the number of chirps a male field cricket makes in 13 seconds. Add 40 to that number, and you will have an approximate temperature in degrees Fahrenheit.

The male cricket’s song tells female crickets that he is ready to mate. Those singing the loudest attract the most females. After mating, the females lay up to 400 eggs in moist sand or soil. After 15 to 25 days, they hatch into nymphs. They grow very fast, undergoing eight molts as they change into adults. At each stage of growth, the nymphs look very similar to adults. The adult stage is reached in about twelve weeks.

Crickets are omnivores, meaning they eat both plant and animal material. They eat small fruit and seeds, as well as plants such as crabgrass and ragweed. They will also eat both living and dead insects. In the house, they may chew on objects made of cotton, silk, nylon, leather, wool, and even rubber. That’s another clue that a cricket may be your latest visitor!

Visit these great sites to learn more about field crickets!

“Can You Tell the Temperature by Listening to the Chirping of a Cricket?” The Library of Congress

Getting to Know Your Mammals: The Raccoon

Idea for the Week: Make a Seed Bomb