Getting to Know Your Reptiles: The Rat Snake

Home » Blog » Getting to Know Your Reptiles: The Rat Snake 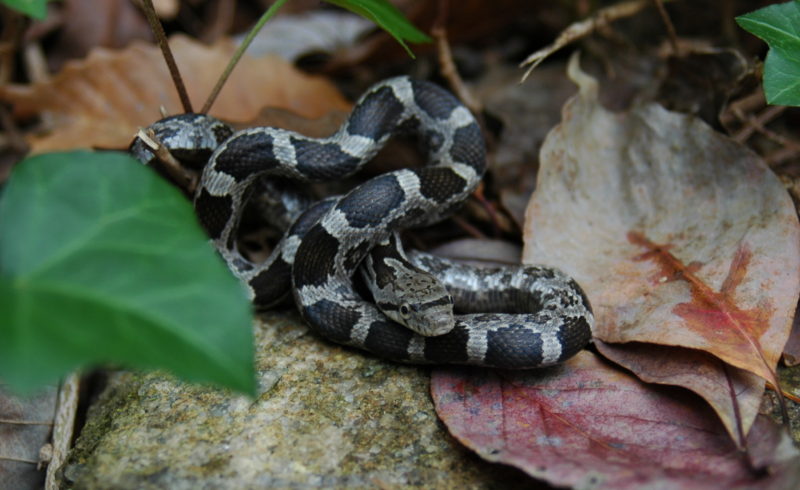 My seventeen-year-old is not a fan of creepy-crawly things, and she’s been working hard at keeping them out of her room. We live in an older home, so sometimes this proves to be quite a challenge. Imagine her shock and dismay to find another outdoor creature inside her space. This time, though, it wasn’t a cricket or a roly-poly. It was a baby snake curled up in a binder on her bookshelf!

Unsure what kind it was, we picked up the binder, knocked the snake into a large cup, and covered the cup so the snake couldn’t get out. I then went to the computer to find out what kind it was. It turns out it was a baby rat snake; with the recent discovery of mice in the house coinciding with the cooler weather outdoors, it was no wonder this little snake had made himself at home in her room.

Adult rat snakes vary in appearance from almost a solid black to grey with brown blotches to green, yellow, or orange with dark stripes. Juveniles of all the subspecies have a similar appearance; they are all grey with dark blotches and a white belly (like the one pictured above).  Adult rat snakes usually grow from three to five feet long, although some grow as much as six feet long.

Besides my daughter’s bedroom, rat snakes are found in most of the eastern and mid-western states. They live in a variety of habitats including hardwood forests, swamp margins, and river floodplains.  They are often found in abandoned barns and other buildings, as well as in suburban areas. They are good climbers and can easily move up tree trunks or brick walls.

Rat snakes mostly eat mice and other rodents, along with birds and bird eggs. Chicken eggs and chicks are a favorite item on this snake’s menu. Juveniles like the one we found eat small frogs, lizards, and small rodents.

Rat snakes aren’t venomous, but they do bite if you try to pick them up, often leaving small puncture wounds. When frightened, they often move into a “kinked” position and remain completely still. Sometimes they will vibrate their tails and give off a bad smell.

We took our little rat snake outdoors and let him go near a rock wall. Hopefully he’ll find a new home there – far from my daughter’s schoolwork!

Activity for the Week: Make Plans for the Summer

What’s that Screaming in the Woods?

Idea for the Weekend: Plant a Sunflower House